A terrible tragedy struck the community of QQ Section, Khayelitsha on the night of 7th December, 2010. A fire swept through the settlement in a matter of minutes, wiping out some 100 shacks and completely destroying the QQ Community Creche (Day Care Center) that CHOSA had assisted the community to build and operate.

According to CHOSA Executive Director Jared Sacks, who rushed to the scene to offer solidarity, the firemen arrived much later, but by then more than 500 people left homeless by the inferno were already counting the costs in terms of their lost homes, and their lifetime accumulation of possessions – including beds, school uniforms and other clothing, appliances, ID documents, medications, food, family memorabilia and even for many the cash savings they had stashed under their mattresses (NB: It’s very dificult for a poor person without a regular income in South Africa to open a bank account). Fortunately, no humans were killed or injured, but one family lost their beloved pet dog who was trapped when the shack caught fire and collapsed.

The Cape Town city disaster services followed the belated fire service with meagre donations to each of the homeless families, which included: five zinc sheets (roughly enough to rebuild half of a single wall of the average shack dwelling), a few wooden poles, some small blankets, baby formula and a small amount of rather unappealing food.

The fire itself – as well as the inadequate response of city officials – was a source of deep sadness, as well as anger, for many in the community. This was especially due to the growing argument from poor communities that the widespread occurrence of shack fires in South Africa’s poorest settlements is the result, not of natural disasters, but of the lack of electricity in shack settlements, which forces communities to resort to a range of unsafe, and unhealthy, energy sources for heat and light. 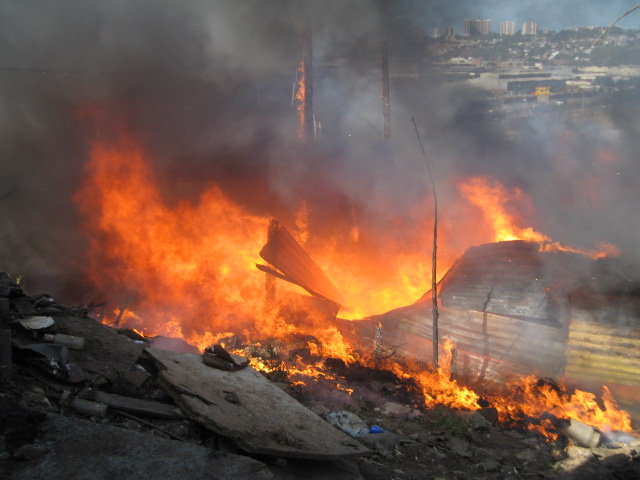 The destruction of the crèche itself was also a source of great sadness for those who had worked hard to build and operate it, and for the parents and children who relied upon the service. The QQ Children’s Committee, which oversees the operation of the crèche, spent the following days assisting the homeless families to rebuild their shacks, while mulling over the challenge of prioritising the multiple and urgent needs of the community in the wake of the blaze. Homes needed to be rebuilt. The crèche needed to be rebuilt. The most basic needs of community members needed to be met. The furnishings and materials that had been accumulated in the crèche needed to be replaced. Nobody could say immediately which should come first, but everyone agreed that support was needed – and needed urgently. The community would have to come together to see what resources could be found and which needs could be addressed according to this.

The QQ Community Executive Committee – an affiliate of the social movement Abahlali baseMjondolo (Shackdwellers Movement) – issued a public appeal for emergency assistance funds from supportive individuals and organizations. As CHOSA, we were happy to be able to offer the community a grant of R30,000 in emergency funds through the QQ Community Creche. While we know it is only a small fraction of what the community will need to recover from this tragedy, we are deeply grateful to the entire CHOSA family for enabling us to offer some critical emergency support to a community that has done such amazing work to support vulnerable children.

It is moments like these when we especially feel the power of CHOSA’s grassroots-to-grassroots model, when ordinary people who care can reach out to provide immediate relief to ordinary people who need it so urgently on the other side of the world. We hope you will be able to help CHOSA continue to support the QQ Community Creche in 2011, as this support will be critical to the community’s recovery.

*As many of you know – because you have answered our calls for help before – this is not the first time that CHOSA has been called upon to provide Emergency Support to the communities with whom we work. Emergencies are a fact of life for poor communities in South Africa, due to the precarious socio-economic conditions in which people live. As CHOSA, we have begun discussing ways to ensure that we will be able to support our partner communities in such emergencies in the future. Please look out for future updates on these plans in 2011.

NB: CHOSA wishes to thank Abahlali baseMjondolo for the above photograph, originally posted on their website as part of their report: “A Big Devil in the Jondolos: A Report on Shack Fires“.