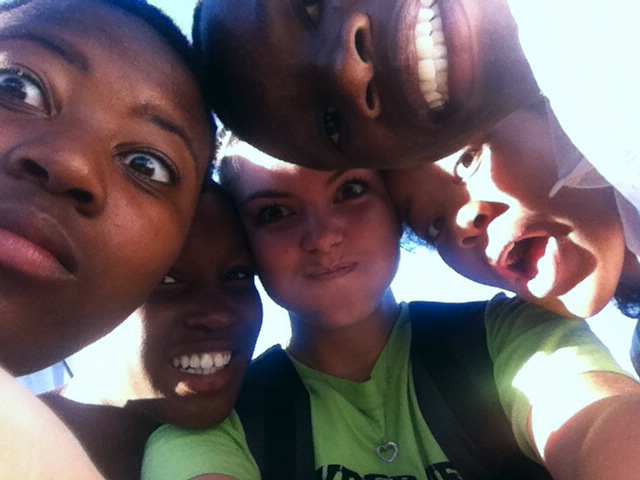 Last semester, I spent six months on a study abroad program in Copenhagen. Without even spending three weeks on European soil, there was a part of me that ached for more. I cannot explain the gut feeling that drove me to click “Cape Town, South Africa” on my second study abroad application process, to ignore requests from my friends and my family who were asking me to come home instead. My entire pre-determined journey shifted because I had a feeling – just a tiny gut feeling – there may be something for me in South Africa that wouldn’t be in Washington D.C.

Even before arriving to Cape Town in January, my biggest mission after submitting my application was to become a part of CHOSA. I idolized the work CHOSA did, and the principles on which they base their organization from. I emailed CHOSA’s co-founder Jared for months, leading up to the day of my departure from New York. I crossed my fingers that with enough persistence, I could receive an internship with CHOSA. And because of this, since arriving in January, CHOSA has become a part of my daily routine.

So when I was first asked to write about my experience with CHOSA thus far for our newsletter, I was excited. It’s a simple reflection, and I figured writing this page long summary would be my easiest assignment for CHOSA yet. But as I’ve spent more time writing and re-writing a “simple” reflection than I’ve spent on a thesis paper, I can’t help but laugh at my previous assumption. And I’ve finally figured out the reason: I cannot possibly just pinpoint one or two or even three things that have made my experience with CHOSA so far. There are too many, and my experience has been an on-going process.

It is sending emails to CHOSA in October, creating a fine line between persistent and annoying. It is coming into the office a couple days after unpacking my suitcase to show how much I want to be a part of the team. And then it is being given the chance. It is receiving a set of keys to the office, receiving a CHOSA email address, and receiving an opportunity.

It is my naturally talkative and gregarious behavior hidden by a more nervous, shy version of myself. It is looking at Jared, and Zukie, and Elena, and Solitude as people who do great things, but people who I do not know. And then it is seeing them on a daily basis. It is the car rides into Khayelitsha, becoming chatty again, talking about my parents and then swapping stories about our lives. It is acquaintances turned into mentors turned into friends.

It is a completely foreign language, and the eagerness of learning something I do not understand. It is Solitude patiently repeating greetings and sayings at least three times for me to not butcher their meanings. And then it is the look on a caretaker’s face when realizing I entered their home speaking in their language, not my own. It is my normal “Hello, How are you?” evolving into “Molo, Unjani?!”

It is watching children run up to the white CHOSA car, knowing Elena and Solitude are nearby. It is taking only three seconds after we roll up the window for more than a dozen eager children to stand at the gate, yelling “Elena! Elena!” and waiting for Solitude to sing them a song. It is watching this unfold in January, and then it is finally hearing, after almost two months, the eager shouts of my own name when we arrive. It is the beautiful sound of name recognition followed by piggyback rides and tickling wars.

It is a simple idea brought into the CHOSA office without knowing if it would materialize. It is trying to explain a sketched out plan and an outline of my thoughts. It is going to the Abaphumeleli Home of Safety, speaking with Mrs. Makasi and then the teenagers in order to see their interest in participating. It is meetings with Solitude to go over lesson plans, to brainstorm new ones. And then it is witnessing a mere possibility evolve into a concrete program. It is a creative writing workshop that now meets two times a week. It is now not just seeing the same teenage faces but getting to know them. It is icebreakers, and team building activities, and teaching new ways of expression through a piece of paper and a pen.

It is running straight from class to take a bus to our office, or three separate taxis into Khayelitsha. It is staying up a little too late on school nights to color coordinate Google docs and excel spread sheets. It is teaching a teenager how to type on a computer. And it is myself being taught much more than I can teach.

It is all of these experiences – but more importantly, it is so many more – that have been created by working with CHOSA. I impulsively clicked that application because of a silly gut feeling that told me there may be something for me here. Among other lessons, becoming a part of CHOSA has proved that if nothing else: go with your instincts. What many argued to be a silly decision by a silly gut feeling has evolved into one of the best decisions of my life so far. Working with CHOSA has made my experience here in South Africa. And that’s why this was so hard to write; how can you possibly fit two months of interning but a lifetime of memories into 900 words? Because in more words than a page could possibly describe, CHOSA isn’t a part of my experience of being in this country; CHOSA is the experience.