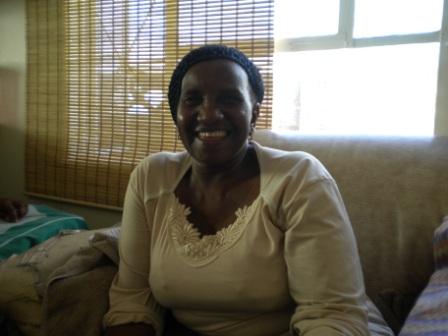 Sibulele is a 17-year-old boy from Ilitha Labantwana Place of Safety. “Sbu,” as he is affectionately called, has been out of school for two consecutive years as a result of some confusion that took place at the school where he was completing grade 7. Upon receiving his final grade 7 results, it was recommended that he should attend a trade school rather than traditional high school. However, the school neglected to provide necessary documentation to prove whether or not Sibulele had difficulty learning in a traditional school. This put Sibulele in a difficult situation: he could not be admitted to a traditional high school, but also lacked the proper documentation to apply to a trade school. Due to administrative difficulties, this situation continued for two years.

Sibulele’s grandmother, Rosemary, founded Ilitha to take care of children who have been abused and neglected, and this is our fifth year working with her and the children in her care. When CHOSA’s on-ground staff heard Sibulele’s story, they committed to doing everything in their power to help. Realizing that 2013 would mark the third school year that Sibulele would miss, CHOSA staff took the initiative to find a solution. They scheduled meetings with the Western Cape Education Department, who informed them that Sibulele could not be admitted to a government school because his age (17 years) did not match his grade level (grade 8). They suggested he attend a night school or St. Frances Adult Education Center, located in the township of Langa. Because a night school posed safety concerns, CHOSA staff visited St. Frances and found it to be a suitable educational environment for Sibulele. On January 16 of this year, CHOSA staff took Sibulele to the school, where he got accepted and registered for classes. He is now taking grade 8 courses and is enjoying being back in school. Sibulele and Rosemary are incredibly grateful to CHOSA for their support in making this possible. Rosemary promises to encourage “Sbu” to keep going to school and make something out of his life.

When CHOSA partners with a project, we make a conscious decision to invest not only in the children but in the caretakers and the community as a whole. Sibulele’s story is a shining example of that philosophy in action. It is our hope that Sibulele, who has been a help to Rosemary in the past in keeping financial books for the home, will take the educational opportunity he’s been given to excel and to influence the lives of those around him.