After nearly two years, justice has finally prevailed in the case of twelve members of Abahlali baseMjondolo, a shack-dwellers movement based in Durban with whom CHOSA has worked on multiple projects. In late September 2009, members of the movement living in Kennedy Road Informal Settlement were brutally attacked and evicted from the settlement, apparently as “punishment” for their criticism of unlawful evictions in settlements across South Africa. The attacks destroyed the Claire Estate Drop In Centre, which CHOSA had just started funding. The center fed hundreds of children, housed a day-care center for about 50 kids, and did community outreach to many vulnerable families in Kennedy Road. 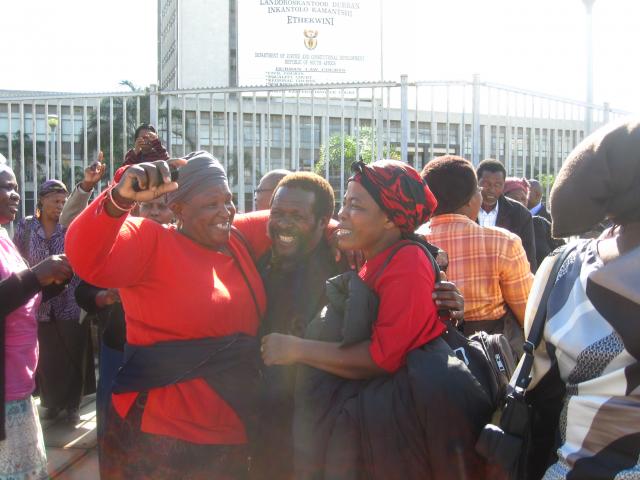 CHOSA called on you for emergency support at that time, and your generous response enabled us to provide desperately-needed funds to the families affected by the attack. CHOSA’s emergency funds made a world of difference to many of the 1,000 men, women and children displaced by the violence. However, long after the community had begun to rebuild, justice had still not been served. In fact, instead of the armed gang that unleashed the attacks being brought to justice, Abahlali’s members were arrested under false charges. To draw a comparison to American history, this blatant obstruction of justice was in many ways reminiscent of the vilification of the U.S. civil rights movement of the 1960’s and 70’s. In a recent court decision, evidence has shown that witnesses were told to lie and coached by police before they took the witness stand – essentially, the entire  trial has been shown to be a set-up. Last month, Durban Magistrate Sharon Marks dismissed all charges against the activists, a major victory for the movement, and a challenge to police complicity in the violence. You can read more about the case in their own words, and in this press release.