A couple of months ago, CHOSA hosted two book launches and fundraisers in Los Angeles and Santa Barbara, CA, to promote a unique book written by one of the CHOSA-supported communities in Cape Town, South Africa. These were very successful events where a number of books were sold and more than $8,000 in donations was raised for the children. But the events were more than that: They were also a challenge to those who think that experts know more about the daily struggles of poverty than those already living it. 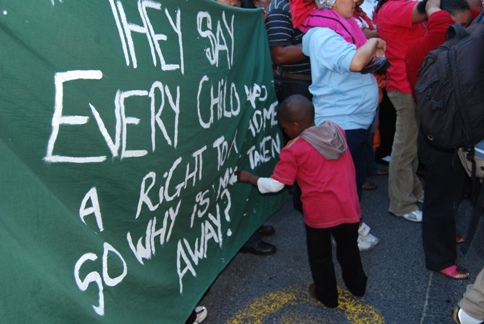 When I began to help the Symphony Way Pavement Dwellers put together an anthology of stories about their collective struggle for land, housing and dignity, I realized that something of this nature had almost never been done before. I searched far and wide for examples, yet I could not find a single book that was written and edited collectively by a group of people living and struggling in poverty. I realized how important it was to have these voices not only heard but also counted.

No Land! No House! No Vote! Voices from Symphony Way, contains 45 factual stories about one of the longest civil disobedience land occupations in South Africa’s history: a 21 month occupation of a main thoroughfare by a community refusing to move to a transit camp called Blikkiesdorp or “Tin-can Town”.

Yet, as readers will realize, this book isn’t about some ideological demand for handouts. Instead, it is about the daily struggles of 139 families who – despite police intimidation, violence, dysfunctional relationships, anger, illiteracy, and unemployment – were able to build a strong, safe and caring community. Not only did they stomp out crime, ensure their children went to school, and create a community garden; they also, with some help from CHOSA, were able to build a small day-care centre, run netball and soccer teams and also establish a popular theatre program for the children in the community.

While the community was eventually evicted to government-built shacks where they were overrun by crime and drugs, each and every author will tell you that their experience in Symphony Way gave them hope that they can (and will) change their lives for the better.